Located 30 miles far from Castellon Port, Columbretes Archipelago is, doubtlessly, one of the richest treasures on our coast. The Columbretes Islands are a declared  Marine reserve and a nature Park. They are well-known for its beautiful underwater landscapes and by its clear crystal water. 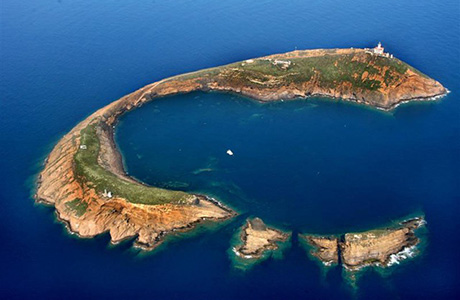 These Islands are arid areas formed by four groups of volcanic islands settled on bottoms of about 80 mts of depth and covering  a length of about 3 nautical miles. There is a huge amount of shoals and reefs, and a great presence of craters and central vent volcanoes.

The geomorphology, the vegetation and the fauna of these islands are absolutely modelled by the continuous sea action, thanks to the erosive processes produced by the climate forcing agents that have constantly sculpted the landscape of the island.

The biggest island, known as “Columbrete Grande” or “L’illa Grossa”, has got a contour with an open arch shape, characteristic of an enormous submarine volcanic activity. On this island, one can find the highest point in the archipelago (67 mts. of altitude, where its lighthouse is also located). Another Island is “Carallot” which is 32 mts high and it represents the remains of its central vent volcano.

Currently, this archipelago is a Nature Reserve which is the house of some endangered species, such as the “Eleonor Falcon” and the “Audouin Seagull”. Its sea bottoms are a prominent Fishing Reserve which contributes to the regeneration of a large variety of fishing species from the area, such as the lobster.

In reference to the vegetation, it is considerably low, being similar to thickets and, thanks to the protection and regeneration work, it covers the most of the archipelago area. As regards to the fauna, there were many snakes (named “culebras”) long ago, which gave name to the Islands, who ended up becoming extinct.

By continuing to browse this website, you accept that cookies will be used to ensure that your visit runs smoothly and obtain user statistics. More info | Close